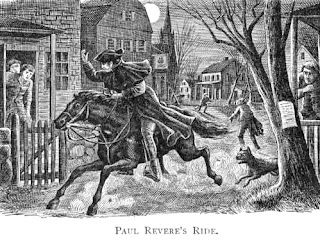 Like Paul Revere on his famous ride from Boston to Lexington, I have done my best to spread the word on the Chatfield public meetings.  Previously I have used the internet to try to get the word out with a dedicated Facebook page http://www.facebook.com/SaveChatfield and a petition at http://www.change.org/petitions/the-governor-of-co-save-chatfield as well as writing about the issue several times on my blog (http://www.alohafridays.net/). Using these current outlets I have written the previous and this current blog post on this subject, set up several Facebook events and invited local friends to attend, and added updates to the Save Chatfield and petition sites.  Also as I have done previously, I have continued to keep my fellow residents updated via the Trailmark community Facebook page and will likely try to write another article for the community newsletter as I did last Fall. However, to try and increase the reach for the public meetings this week I also tried several other tactics.

I contacted numerous publications including the Denver Post, 5280 Magazine, Westword and the Littleton Report.  A news release was supposed to be put out by the US Army Corps of Engineers, but I am unsure if it was (Westword claimed they have not seen anything) or not and who it went to. At the only previous public meeting held back in 2004 only 18 people attended the meeting “because no newspapers printed the information provided by the news release” according to the current Chatfield Study report.

I contacted affected groups and businesses.  To try and get to the numerous bikers I contacted the folks who put on the Deer Creek Challenge Bike Ride and Bicycle Village the largest bike store in the area who organizes group rides.  I contacted Chatfield Stables to reach the community who rides horseback through Chatfield.  I contacted the Chatfield Ballooning Association who already lost their popular Balloon Festival to increased park regulations and would be affected directly by the flooding of the balloon port. I contacted the Chatfield Sailing Association and Cool Toys Marine to reach some of the boating community since the marina would be radically changed.

On the environmental side, the Audubon Society of Denver has already had some involvement and has been spreading the word to their members who I also contacted.  I also contacted the Colorado Ocean Coalition to get them interested in the closest thing we have to an ocean in our home state.  I also sent a message to the Front Range Birding Company, a local store that supports the bird watching community that is very active at Chatfield.

I contacted the Littleton Mayor and City Council as well as the South Suburban Parks and Recreation Board.  They too should be tied into this process, especially because it could affect a project they have worked very hard on involving South Platte River enhancements.  I have asked them whether they are aware of any impacts because I have not found this discussed in the US Army Corps of Engineers report.

I am headed to tonight’s public meeting at Dakota Ridge High School.  It will be interesting to see the turnout and see if we can beat the previous mark of 18 people in 2004.  I also will try to contact folks for the other two meetings to gauge their turnout.
Posted by Todd Mosher at 6:16 AM