Back on April 25, 2011, I talked about the need for a new challenge after completing my Lavaman Triathlon (http://www.alohafridays.net/2011/04/next-challenge.html) and I reviewed all of the events I did in 2010.  The problem is I have never gone back and told everyone what I have ended up doing this year and what is still out in front of me before 2011 ends.
Surf City Half Marathon: My first event for 2011 was this race, which I felt would be a good gauge of where I was with my winter triathlon training.  Also after having run it two years ago in a torrential downpour off the ocean, I wanted the beautiful southern California weather I was promised.  You can read more about it at my February blog post on the event (http://www.alohafridays.net/2011/02/all-for-surfboard.html), but since I did get the promised sunshine this year I am really thinking about going back in 2012.
Lavaman 5K: I knew I was in good shape when I set my personal record 5K time in the Lavaman 5K warm-up race for the triathlon on the Friday evening before the Sunday race.  While some would caution against running this race so close to the main event, I found it to be a nice warm-up and a real confidence booster.  If I go back to Hawaii, I will probably do it again.
Lavaman Olympic Triathlon:  I have already written about this race quite a bit (http://www.alohafridays.net/2011/04/lavamanthe-movie.html and http://www.alohafridays.net/2011/04/how-about-118.html), but this is one of the best events I have ever participated in.  Despite the daunting fundraising, I am considering it again for 2012.
Cherry Creak Sneak:  Like 2010, this race marks the end of winter and the beginning of the real season.  It also serves as a good gauge of where I am in training for the Bolder Boulder at the end of the month.  This year it taught me I had let my training go a little after the elation of my Lavaman race.
Bolder Boulder:  As one of Colorado’s trademark fitness events, this 10K never lets you down.  I spent some time talking about this race on the eve of running it (http://www.alohafridays.net/2011/05/next-up-run-bolder.html).  Despite being less well trained than last year, I had a good race just 30 seconds off my personal Bolder Boulder best.  Now in 2012, I know with more consistent training, I can have higher expectations.
Hiking for Hearts: After not doing any events in June, I took advantage of one of the fairly unique opportunities that Colorado offers with another 14er hike with the Hiking for Hearts organization.  I talked about this in a few earlier posts (http://www.alohafridays.net/2011/07/hiking-for-hearts.html and http://www.alohafridays.net/2011/07/14ers-checklist.html) so I won’t spend any more time here.
Osh Kosh Air Show 5K: I made a deal with my airplane crazy friend Frank Taylor that I would go to the air show that makes Osh Kosh, Wisconsin the busiest US airport for a week if he would run this 5K and go to a Milwaukee Brewers game with me.  He kept his promise, so I got a wake up call that it was time to stop working so much and get ready for my September triathlon.
Which all leads me into my fun event filled weekend ahead.  First, Saturday since I am going to miss the practice triathlon that is a part of my Nation’s Triathlon training (my next triathlon on the 10th anniversary of 9/11 in Washington DC), I need a multi-sport workout.  So I am going to start with a early morning lake swim and then run the Dakota 5000 5K (another repeat event from last year) with my wife and daughters.  I may finish fourth out of four among that group.  Then on Sunday I am participating in my first Warrior Dash, which will be story worthy.
After knocking out two in two days, I still have some old favorites from 2010 in front of me like the Fans on the Field, the Second Wind 5K, the Denver Gorilla Run and the Colder Boulder. I also have the before mentioned Nation’s Triathlon.  Then in November, I will run the Space Coast Half Marathon my wife and I are incorporating into a Thanksgiving trip to Orlando to address my youngest daughter’s Harry Potter obsession.  If I pull this all off, it will mean I will exceed my 12 events in one-year goal (roughly one-a-month).  Of course a weekend of two events in two days will make it easy.
Posted by Todd Mosher at 8:47 AM No comments:

How I Spent the Last Day of Summer Vacation

Does anyone remember how when we got back to school we had to write those essays on how we spent our summer vacation?  To make this assignment modern, I am going to write a blog post on how I spent the last day of my kid’s summer vacation before they start school on Monday.
We started the morning with the my two youngest (there was no way my oldest the teenager was going to wake up early on the last day of her summer vacation) and I heading down to the Real Pirates exhibit at the Denver Museum of Nature and Science (see picture below).  It is the final weekend and we have talked about going all summer long so we finally did it.  Put together by National Geographic, it is of course well done telling a great story. It does a great job of showcasing the artifacts and providing a multimedia experience with video, hands-on exhibits, and even a live actor pirate crewmember.  Beyond just another ride on the Pirates of Caribbean at Disneyland or watching Johnny Depp stumble around in the movies of the same name, this exhibit covered all aspects of a pirate’s life from why various people were motivated to become pirates to the fact that they actually had a very open, ethnically diverse, democratically governed society.  Some of the folks in Congress could probably learn about the mutual good from the pirates since both of them ultimately are after plunder most of the time. 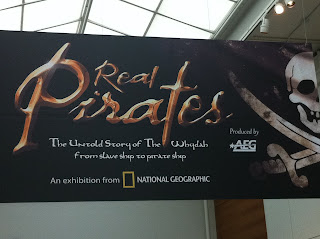 The Real Pirates Leave Denver This Weekend
Spending all of that time learning about the high seas made us antsy to get on the water so in the afternoon we talked about going stand-up paddle boarding.  While the threat of and afternoon thunderstorm that never came kept us home, I at least used that motivation to promote the Save Chatfield Facebook cause page I talked about a little bit more so the afternoon was not completely wasted (http://www.facebook.com/pages/Save-Chatfield/211376865577886).
Monday will mark the change of seasons in our household with our three kids now at three schools, while my wife works at a fourth, instead of having two of the kids and my wife all at the same school.  So as a preemptive strike, I bought my wife flowers knowing that the back to school fun is about to begin.
Posted by Todd Mosher at 8:08 PM No comments:

So tonight I have become a community activist.  Using a Facebook cause page (http://www.facebook.com/pages/Save-Chatfield/211376865577886) I am trying to spread the word about a plan to flood Chatfield Reservoir destroying wildlife habitats and recreational areas in the process.  Cottonwood-studded shorelines where folks go to bird watch would be replaced with mud flats.  Gone would be the swim beach where I lifeguarded in college.  Gone would be the gravel ponds where I currently stand-up paddleboard.  The great recreational facility that I basically live across the street from would be replaced with a med bog used to store water to address urban sprawl.  On a number of levels this just doesn’t sit well so I decided to get active.
I first became alerted to this plan when I read the article in the Denver Post (http://www.denverpost.com/news/ci_18118214).  I then talked to friends I train for triathlons out at Chatfield to find out they were unaware.  I talked with neighbors to find out did they know about this although this might happen right across the street and they too were unaware.  So I decided to use the social network and my blog to start spreading the word.  I also signed up for the project’s mailing list so that I could share this word, because I think it would be easiest for all involved if no one really knew about this.  So we will see what happen and what comes in my experiment of social activism.  Perhaps it will help all of us to stay out of the mud. 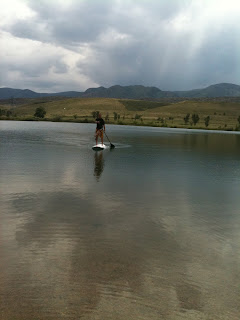