All for a Surfboard

I will do a lot of things for a surfboard.  Case in point is on Super Bowl Sunday while most of the country was finding new ways to eat themselves silly, I was running the Surf City Half Marathon (www.runsurfcity.com) in Huntington Beach, California.  The main reason I was running this event was so I could claim the surfboard medal, one of the cooler finisher medals I have found.
What probably makes this even crazier was that this was not my first surfboard medal.  Two years ago I ran the Surf City Half Marathon, by myself, in a torrential down pour with serious winds blowing off the ocean (they don’t use pictures from 2009 to advertise the event).  Despite that weather and my running partners for that year not making the trip, I claimed my surfboard so it would appear that box would have been checked.  But Sue Fabek, one of my old running partners from Team in Training who had moved to Michigan, was one of those running partners who didn’t make it the last time and she committed early to running the event.  Also when I asked Sally about being away for the big game she said there was no way her beloved Steelers were going to make the Super Bowl so go ahead.
What made those 13.1 miles daunting is I never really got that many long runs in as it was difficult to squeeze them into my busy triathlon and RBC training schedule.  In fact the longest run I did prior to the half marathon was 10K, which is half the distance of the half marathon.  This didn’t look good, but it was all about getting a surfboard.  So despite this training that didn’t follow the prescribed approach (or perhaps in spite of it since I really believe all of the interval training I am doing is better than sustained long runs, bikes or swims), I set a personal record and claimed my surfboard.  The photo below shows me after the race and I actually felt pretty good knowing I could eat anything I wanted for the Super Bowl game that afternoon. 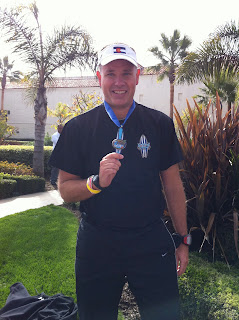